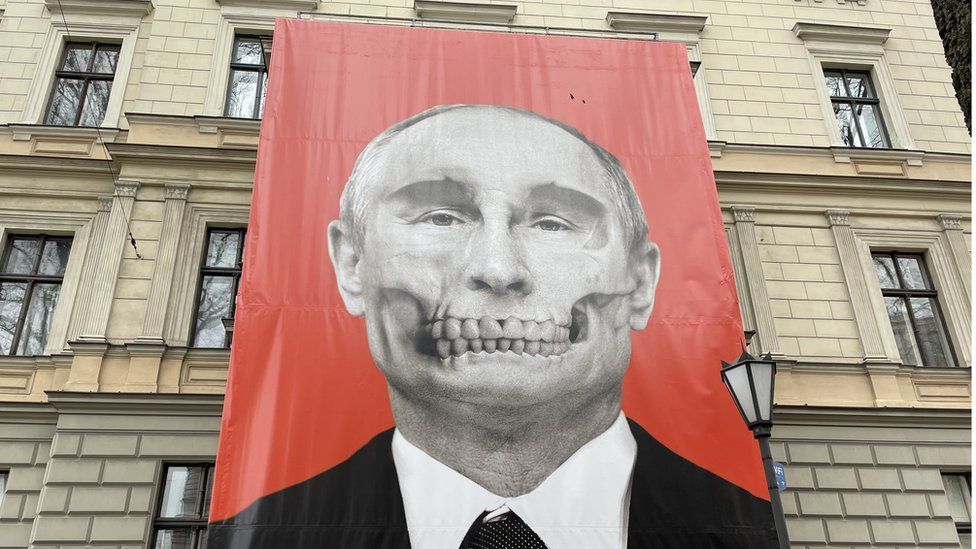 Are they right? Yes and No, I'd argue.

Starting with the Yes.

On 24 February, President Putin shocked this continent out of complacency.

His assault on Ukraine has brought large-scale death and destruction back to Europe, including whispers of possible nuclear war.

His aim: not only to dominate Ukraine, but to roll back Western dominance militarily and - ideally - politically, in terms of liberal democracy, from the former Soviet sphere of influence.

The action Western allies take together now will fundamentally affect Europeans' sense of self and safety for years to come.

Nato is re-invigorated. The transatlantic military alliance, once dismissed by French President Emmanuel Macron as "brain dead", is simultaneously proving Mr Putin wrong to view the West as weak and disunited, while also providing military support, defence and deterrence to Nato's eastern flank that feels so exposed to the Kremlin's expansionist fervour.

This - so far - is also proving to be a defining moment for the EU. The bloc had long talked up playing a bigger role on the world stage - and not solely in terms of economics and trade. Until now, that was a failed ambition.

But the Russia-Ukraine crisis has unexpectedly elevated the EU into a credible geopolitical player.

The speed with which Brussels co-ordinated sanctions against Russia - both within the EU, and with international allies - was frankly impressive. As were the unity of resolve amongst member states, and the bureaucracy-defying EU moves to enact never-before-used mechanisms to help Ukrainian refugees, and the Ukrainian military.

Germany, one of the EU's biggest players, also took the world's breath away by suddenly saying goodbye to World War Two sensitivities and announcing huge investments in its military, the Bundeswehr.

Key to the decision being applauded in the EU and further afield is that this is not a Germany newly flexing nationalist muscles.

"This is about Germany helping to re-define Europe, not its own role," Ricarda Lang told me. She is the co-chair of the German Green Party in the coalition government.

"It's about European sovereignty, not just in security and defence but also in terms of imports and energy."

For years Germany has knowingly been reliant on the US for security, and on Russia for energy and trade. It is not the only EU country in that position. But as the bloc's richest and most powerful nation, Berlin is the most stand-out example.

And this has weakened the West's hand when it comes to sanctions against Russia.

EU countries pay Moscow up to €800m (£674m; $884m) for energy every day, which amounts to an estimated 40% of the Kremlin's income. This money goes towards funding the war against Ukraine, that the West is ostensibly fighting.

"It's tragic it took a war like this, but now we Germans have woken up with a bang!" insists Marie Agnes Strack-Zimmerman, who heads the German parliament's Defence Committee.

She assured me Berlin was now ready to take responsibility. 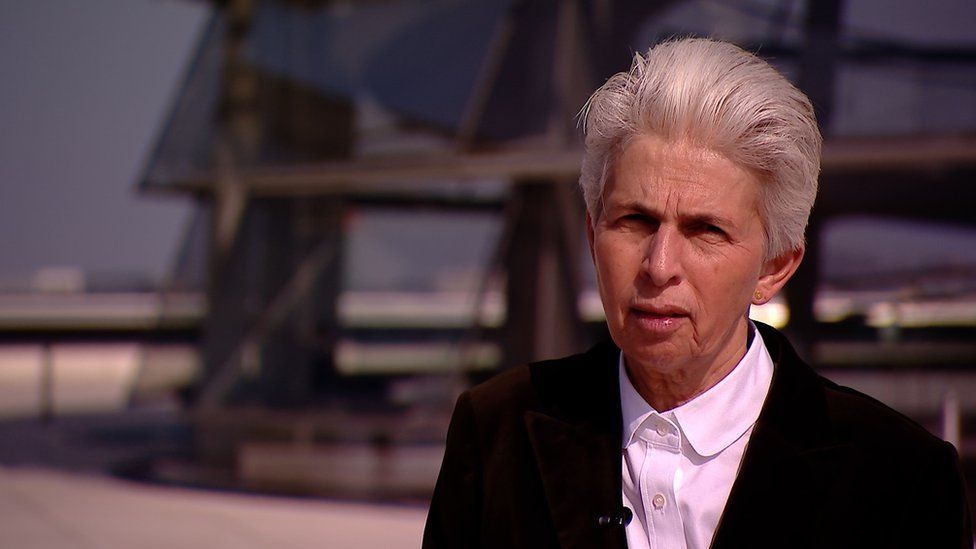 'We Germans have woken up with a bang!' said the chairwoman of the German parliament's Defence Committee

The West looked at Germany with suspicion after two world wars, she observed, but that was decades ago, and - to be honest, she said - Germany was pretty comfortable enjoying being a Nato and EU member, without having to invest in its own army.

"Germany's allies have waited too long for us to do our bit."

Berlin has now pledged to build an efficient, modern military, and to keep up defence spending to Nato requirements. Under international pressure, trade and energy ties are being tackled, too.

Bear in mind, though, that transforming the currently threadbare German military will take years, as will untangling the country from its deep-seated relations with Russia.

For decades, Berlin was the dividing line between East and West Europe.

Hopes for European unity were high after the fall of the iconic Berlin Wall, and the ensuing 1991 dissolution of the Soviet Union.

But fast-forward 30 years, and you hear talk of a new "Berlin Wall", though further to the east.

Tiny Baltic country Latvia has a 200km (124 mile)-long border fence, separating the EU and Nato member on one side from expansionist Russia on the other.

Col Sandris Gaugers is the commander of the Latvian Land Forces Mechanized Infantry Brigade. We spoke at his military base, just outside the capital, Riga. The base is also home to Nato forces, which have almost doubled in size since Russia invaded Ukraine. 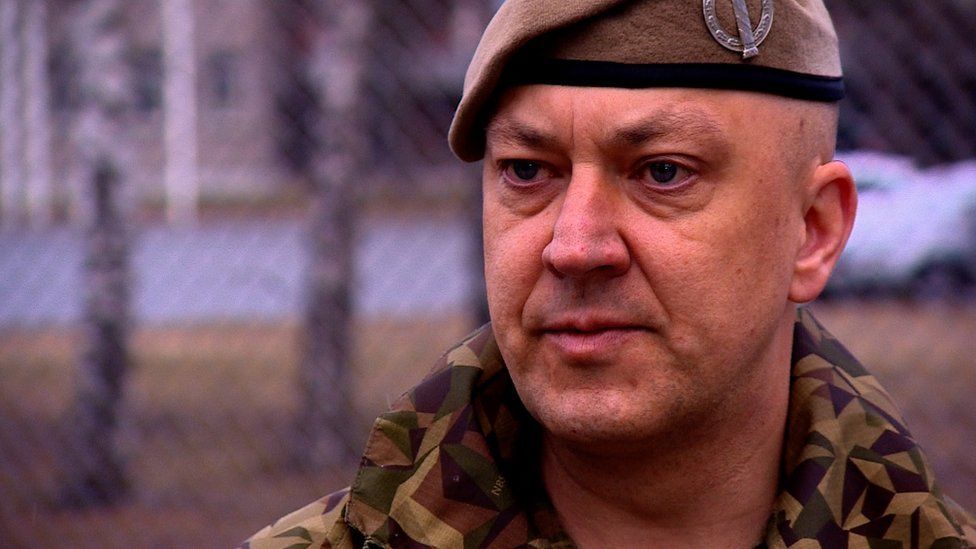 "I see a new Iron Curtain coming. Though this time, we'll be on the western side," the colonel told me.

"We are living a new reality. For us Latvians the security environment is now gone. We spent 20 years in Iraq, in Afghanistan. Now our main focus is here. How do we defend our freedom and our country?"

Priorities have now changed across Europe, he said. "People used to focus on economic wealth. Now it's about defending our values and way of life."

Latvians and their Baltic neighbours in Estonia and Lithuania are trying hard not to say "I-told-you-so" to the West. They've been warning about President Putin for years.

They feel they understand the Russian leader better than most. All three countries were once part of the Soviet Union.

Latvia's Prime Minister, Arturs Krišjānis Kariņš, insists the West has to accept that "Putin is not like us". France and German leaders famously went on diplomatic visits to Moscow earlier this year, trying to dissuade President Putin from attacking Ukraine.

Prime Minister Kariņš says agonising over finding the right words, or turns of phrase to persuade Mr Putin, is pointless.

"He's hell-bent on destroying democracy and our way of life.

"If we don't stop Putin. He will not stop at Ukraine."

Mr Kariņš said the one good thing to come out of the current situation is that Nato and the EU are working closer together than they have in 30 years. That, he said, was a game-changer.

And here we come back to whether this is an era-defining moment for Europe.

The EU is thrilled to have the US back and engaged in Europe.

For all Brussels' talk of the bloc now building "strategic sovereignty" in defence and security, EU countries look to Washington when faced with Russian threats. 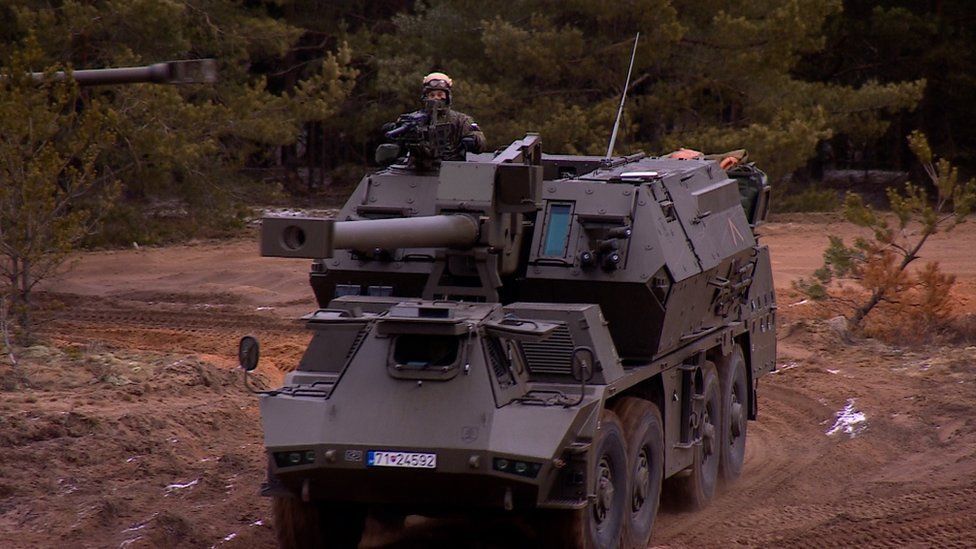 Training session at the Adazi military base in Latvia

EU defence plans, designed to complement - or to partly replace - Nato, depending which European politician you speak to, are nothing new. And so far, they've never worked.

All EU countries agree that at the very least, it makes sense to pool resources and know-how: cyber, military, equipment and intelligence. Yet, no nation wants to go first.

Each EU member has businesses or individuals benefiting from national contracts. The European Commission now wants to oversee the overhaul of defence capabilities. Few in the military are holding their breath, wherever they reside in Europe.

As regards the renaissance in EU-Nato co-operation, in all likelihood, once the acute Russia-Ukraine crisis subsides, the US will turn its attention to what it truly sees as its foreign policy priority: the Asia-Pacific, not Europe.

But the EU has its raison d'être back.

Designed originally as a peace project, its vision fell by the wayside in recent times. Younger Europeans had no memory of war. They saw no urgency in uniting or fighting for peace on their continent.

In that regard, this moment really is a new reality.