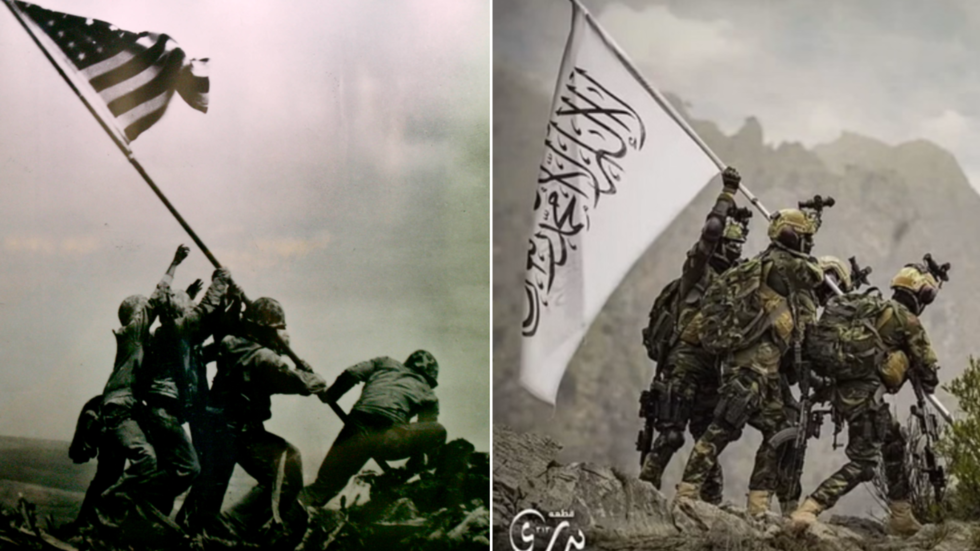 An elite unit of Taliban fighters, wearing US-made tactical gear they apparently captured from retreating Afghan forces, has posed for a propaganda photo, which many outraged Americans found to be the “ultimate insult.”

An elite unit of Taliban fighters, wearing US-made tactical gear they apparently captured from retreating Afghan forces, has posed for a propaganda photo, which many outraged Americans found to be the “ultimate insult.”

In a photo that ruffled many feathers, mostly among American conservatives, members of the Taliban’s commando unit Badri 313 are seen donning full camouflage and tactical gear, including night-vision goggles – seemingly recreating an iconic WWII photo of American troops raising the US flag atop Mount Suribachi during the Battle of Iwo Jima in 1945.

“No Enemy has EVER done this to America, befouled Iwo Jima’s eternal sacrifice, whilst wearing our equipment. Until Biden. He has betrayed all Americans, alive and dead,” said Sebastian Gorka, a former official in the Donald Trump administration.

Much of the outrage and indignation was directed personally at the US commander-in-chief, Joe Biden, who has faced mounting criticism over the past week for the chaotic withdrawal that put American and allies' lives in danger.

“Biden must resign or be impeached and removed,” reacted television commentator John Cardillo, who was recently a host on Newsmax TV. “This just keeps getting worse and worse!” added podcast host and a former Navy SEAL, Jonathan Gilliam.

“This is Joe Biden’s legacy for all the world to see,” Congresswoman Elise Stefanik said.

Only a few appreciated the trolling attempt or tried to find some sad comic relief, with conservative radio host Jesse Kelly tweeting: “Taliban can murder as many people as they want. But if they keep trolling Biden like this they’re gonna get kicked off of social media.”