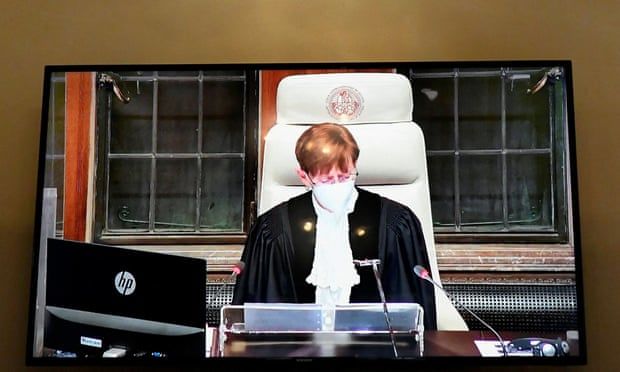 Judge says court in The Hague has seen no evidence to support Kremlin’s justification for the war
The UN’s international court of justice (ICJ) in The Hague has ordered Russia to halt its invasion of Ukraine, saying the court had not seen any evidence to support the Kremlin’s justification for the war, that Ukraine was committing genocide against Russian-speakers in the east of the country.

The court ruled by 13 votes to two for a provisional order that “the Russian Federation shall immediately suspend military operations that it commenced on 24 February 2022 in the territory of Ukraine”. Only the Russian and Chinese judges on the court voted against the order.

The court president, US judge Joan Donoghue, said the court “is not in possession of evidence substantiating” Russian allegations of genocide on Ukrainian territory. In any case, she said it was “doubtful” the Genocide Convention gives any authority for the “unilateral use of force in the territory of another state”.

Consequently, she said “the court considers that Ukraine has a plausible right not to be subjected to military operations by the Russian Federation”.

ICJ rulings are binding under the UN Charter, and the court order noted they “create international legal obligations for any party to whom the provisional measures are addressed”, but it has no means of enforcement. It is unlikely to influence Putin’s choices, but it does provide an authoritative refutation of his frequently used pretext for starting the war.

“Ukraine gained a complete victory in its case against Russia at the international court of justice,” the Ukrainian president, Volodymyr Zelenskiy, said in a tweet. “The ICJ ordered to immediately stop the invasion. The order is binding under international law. Russia must comply immediately. Ignoring the order will isolate Russia even further.”

The order was in response to a Ukrainian appeal to the court on 26 February, asking for an urgent ruling on Russia’s unsupported claims that Ukrainian forces were committing genocide in Russian-backed enclaves in Luhansk and Donetsk, regions in eastern Ukraine, as a justification for the attack.

Russia did not attend an initial hearing of the case on 4 March, nor did its lawyers turn up to hear the ruling on Wednesday. Instead they sent a letter to the court claiming the ICJ did not have jurisdiction over the case, because Russia had formally justified the attack in a letter to the UN secretary general on grounds of self-defence, not on genocide.

Donoghue ruled that “the non-appearance of one of the states concerned cannot in itself constitute an obstacle to” a provisional ruling. She also rejected Russia’s argument on jurisdiction under the Genocide Convention, pointing out the frequent occasions that Vladimir Putin and other senior Russian officials had claimed the alleged genocide was the reason for the attack.

“The court concludes that prima facia it has jurisdiction pursuant to article nine of the Genocide Convention to entertain the case,” Donoghue said.

Marko Milanovic, professor of public international law at the University of Nottingham, said: “The court essentially accepted all of the arguments made by Ukraine.”

Writing on the European Journal of International Law blog, Milanovic argued: “Russia’s failure to comply with the order will have the same effect as its non-appearance – a showing of disrespect for international law and institutions, causing it reputational harm while presenting Ukraine as a state using legal methods of peaceful dispute settlement”.