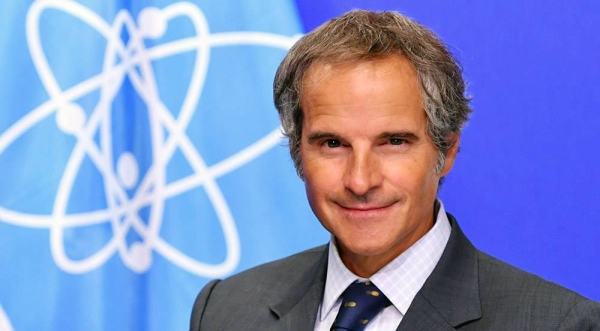 Russia has not offered any evidence for its allegations, which NATO dismisses.

Ukraine’s President Volodymyr Zelensky warned it meant Russia itself could be preparing an attack of this kind.

So-called dirty bombs contain radioactive material, such as uranium, which is scattered through the air when its conventional explosive detonates.

They don’t need to contain highly refined radioactive material, as is used in a nuclear bomb, which makes them cheaper and easier to maneuver.

The IAEA said it had received an invitation from the Ukrainian government to carry out “verification activities” at two unspecified locations, adding that the agency’s inspectors have visited both sites regularly.

Grossi said the IAEA “inspected one of these locations one month ago and all our findings were consistent with Ukraine’s safeguards declarations.”

“No undeclared nuclear activities or material were found there,” he said.

Russia’s state-run news agency, RIA Novosti, said it had identified two sites — the Eastern Mineral Enrichment Plant in central Dnipropetrovsk region and the Institute for Nuclear Research in Kiev — as the locations central to the alleged Ukrainian operation.

Moscow is expected to repeat the allegation during a meeting of the UN’s Security Council on Tuesday.

In a letter to UN Secretary-General Antonio Guterres, the Russian representative to the council, Vassily Nebenzia, said his country would “regard the use of the dirty bomb by the Kiev regime as an act of nuclear terrorism”.

“Our Ministry of Defense has also received information that this provocation can be carried out with the support of Western countries,” Nebenzia wrote in his letter.

Moscow’s allegations, made by Defense Minister Sergei Shoigu, have been rejected by Ukraine and its Western allies.

In a joint statement on Monday, the US, UK and French foreign ministers condemned the claims as “transparently false” and said the “world would see through any attempt to use this allegation as a pretext for escalation”.

Meanwhile, President Zelensky said during his nightly address on Monday that “if Russia calls and says that Ukraine is allegedly preparing something, it means one thing: Russia has already prepared all this”.

Western intelligence officials have been keen to stress that there is no indication that Russia is preparing to use so-called dirty bombs or other nuclear devices.

The Russian claims come as Ukrainian forces continue to gain ground in the southern Kherson region. Kiev’s forces launched a counter-attack in the region in August and its forces have slowly moved towards the regional capital of Kherson city.

In recent days, Moscow-installed officials have fled the city and urged civilians to evacuate over the Dnieper river into Russian controlled territory.

But Ukraine’s military intelligence chief, Kyrylo Budanov, warned state media that Russian troops in the region were preparing the defend the city rather than retreat.

“They are creating the illusion that all is lost. Yet at the same time they are moving new military units in and preparing to defend the streets of Kherson,” Budanov said.

Regional authorities have said that some men who chose to remain behind in the city would have the option of joining local militias to defend it, raising fears that Moscow could force men into military formations. Such actions would constitute war crimes under the Geneva Convention.

Kherson is the only major Ukrainian city — a regional capital — that Russian forces have managed to capture during its invasion.