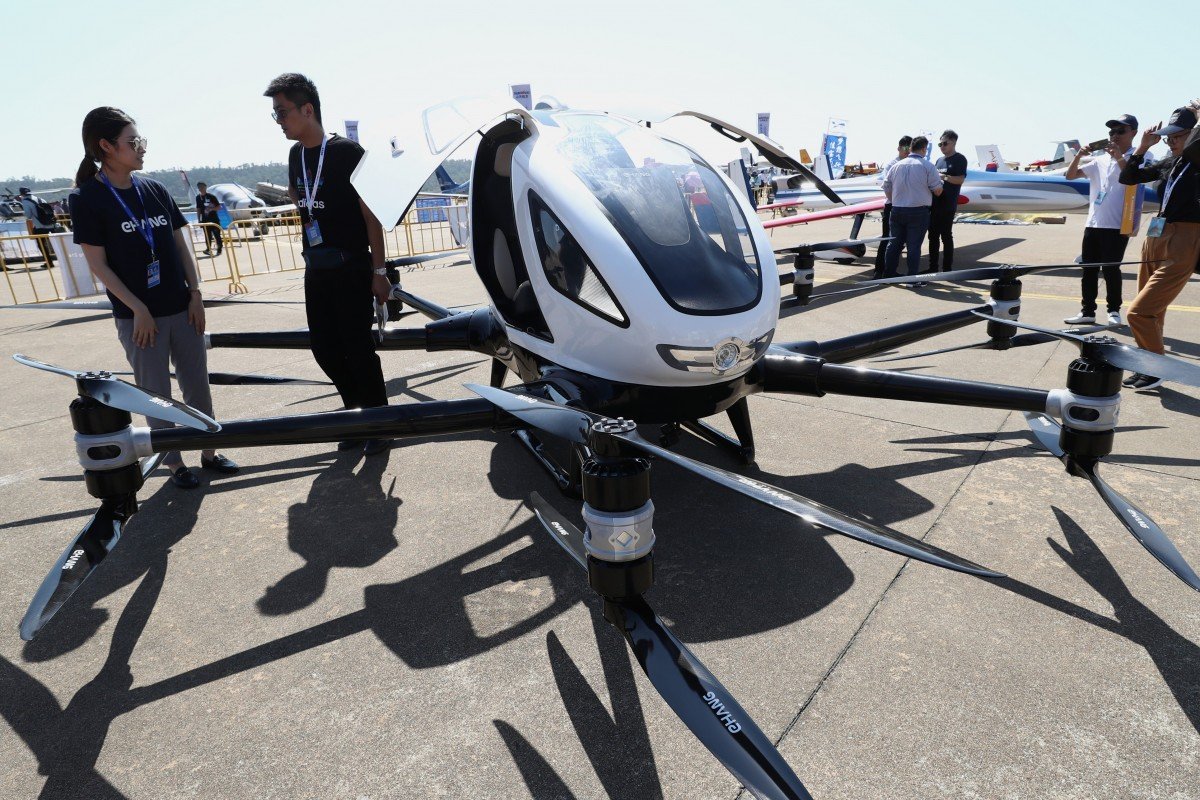 Ehang is the world’s first autonomous aerial vehicle company approved to conduct commercial trials of passenger drones for transporting heavy cargo, it says. The pilotless 216 flying car can hold two passengers and travel at up to 130km per hour

Guangzhou-based Ehang, known for its ambitions to make flying taxis a reality, has obtained what it says is the world’s first commercial licence to test using passenger-grade drones to transport heavy goods of more than 150kg.

The Civil Aviation Administration of China (CAAC) has approved tests of Ehang’s 216 flying car for air logistics, making it the world’s first autonomous aerial vehicle (AAV) company a national aviation authority has approved for commercial trials of drone deliveries involving loads of more than 150kg, the company said in a statement on Wednesday.

The battery-operated Ehang 216 was unveiled in April last year in Vienna, Austria as the company’s latest flying taxi model. The pilotless drone, which can hold two passengers, can cover a distance of about 30km at speeds of up to 130km per hour, according to the company.

With the CAAC’s approval, the company will conduct tests using the passenger drone to transport cargo between ground level and the top of a hill and between the shore and islands at a customer site in Taizhou, a city in the eastern Zhejiang province in China. Ehang intends to gradually expand the trials to other sites in China as it accumulates operational data and experience, it added in the statement.

Drones, usually small, autonomous robots that can be controlled either remotely or by following an internal flight path of their own, have become more mainstream and taken on more applications including in the area of logistics in recent years.

E-commerce giants such as Amazon and JD.com have been experimenting with drone deliveries for some time, but such robot deliveries have become particularly relevant during the coronavirus pandemic amid efforts to prevent the spread of the deadly virus through human-to-human contact.

In China, JD.com and delivery app Meituan Dianping are among the companies that have deployed autonomous vehicles including drones for deliveries during the pandemic, while in the US, Google’s Wing drone delivery system has been used to deliver toilet paper and medicine to residents locked down in the state of Virginia.

However, these autonomous delivery drones are smaller than Ehang’s 216 model and do not have the ability to carry passengers or carry the heavy loads the Chinese company will be testing.

Ehang founder, chairman and CEO Hu Huazhi said CAAC’s approval was of “great significance” as it will accelerate the commercialisation of AAV technology and air mobility solutions for logistics.

“It also lays a foundation for regulators around the world to jointly explore and establish a coordinated, supportive and sustainable regulatory environment,” Hu said in the statement, adding that this will “benefit the long-term development of the promising urban air mobility applications”.

The global market size for urban aviation – also known as eVTOL air taxis or personal air vehicles – could reach nearly US$1.5 trillion by 2040 with China accounting for nearly 30 per cent of the global market share, according to a 2018 report from Morgan Stanley.

Passenger drones “can be a safe and efficient solution to transport cargo”, CAAC deputy administrator Li Jian said, commenting on the civil aviation authority’s decision to grant Ehang the licence.

Founded in 2014, Ehang describes itself as the world's first maker of passenger-grade, electric autonomous aerial vehicles. Earlier this month, the company partnered with Shenzhen-listed tourism platform company LN Holdings to create the world’s first passenger drone-themed hotel, which it said will give guests the opportunity to travel on Ehang’s flying taxis. The company went public in the US last December.