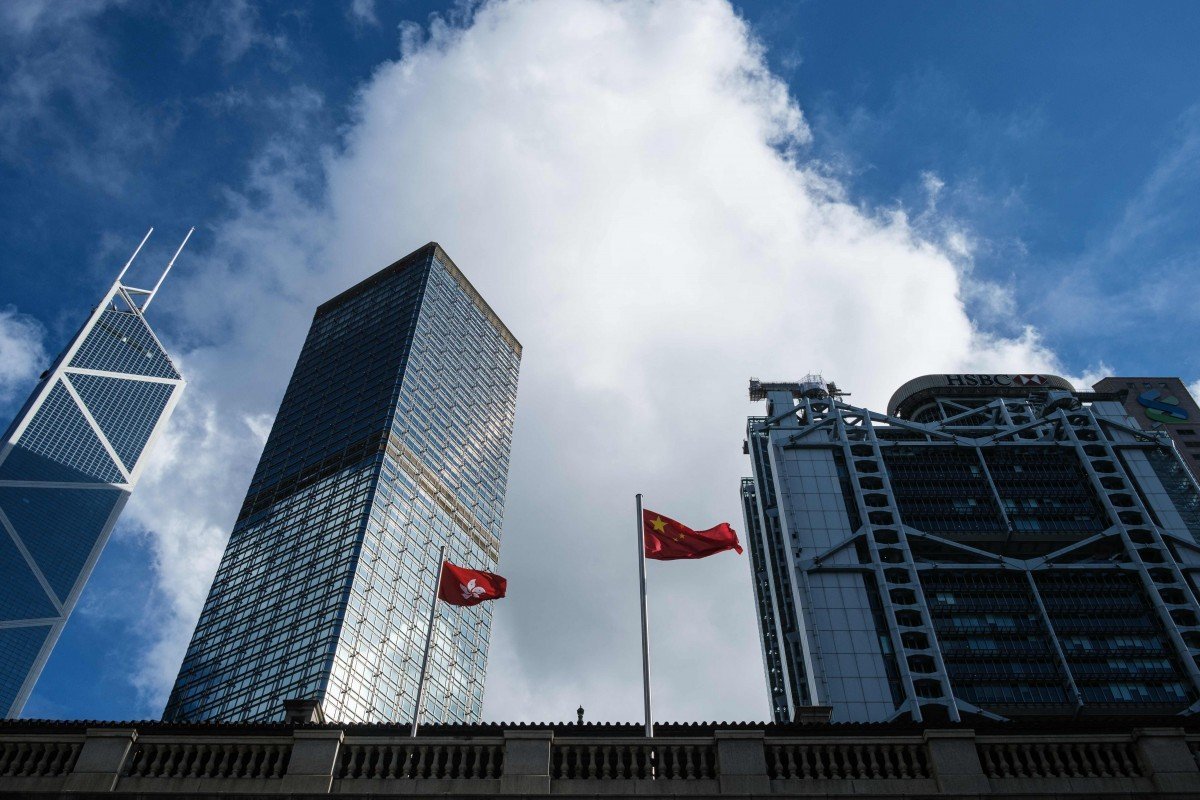 US sanctions on Hong Kong banks are seen as the biggest risk to the finance hub, although one-year time frame before imposition and ability to appeal eases concerns. But analysts say the long-term outlook for the Hong Kong dollar peg is uncertain given escalating tensions between China and the US

US President Donald Trump’s decision to take action against Beijing over its imposition of a new security law on Hong Kong is unlikely to undermine the city’s dollar peg system or its role as a financial hub in the short term, but escalating conflict between the US and China raises questions about the long-term outlook, according to analysts.

Trump last week issued an executive order ending the city’s special economic treatment and enacted the Hong Kong Autonomy Act, which paves the way for punishment of Chinese and Hong Kong officials accused of curbing the autonomy of the ex-British colony, as well as the financial institutions that do business with them.

The US State Department has 90 days to designate individuals or entities in contravention of the law, after which banks will have one year to cease business relations.

Only a few banks are expected to be targeted, and they would be allowed to appeal for removal from the US government’s sanctions list, analysts said. This has eased worries over a full-blown US-China financial war, as well as other extreme scenarios in the short-run, said Alicia Garcia Herrero, chief economist for Asia-Pacific at French investment bank Natixis.

Carie Li Ruofan, an economist at OCBC Wing Hang Bank, said the biggest worry had been the threat of financial sanctions on banks.

“But since the president has given leeway for a lot of time to identify these banks and to impose the actual sanctions, there isn’t a real market impact and there aren’t excessive concerns for the time being,” she said.

Trump’s executive order did not mention limiting Hong Kong banks’ access to the US dollar payment system as a way of punishing China, which would undermine the currency peg system that has allowed the city to remain a global financial hub.

Due to China’s draconian capital controls that restrict the use of the yuan globally, the freely convertible and stable Hong Kong dollar is especially important to China for attracting foreign investment and in turn allowing Chinese companies to easily raise hard currency in the city.

Economists estimate that investment flows through the city account for more than 70 per cent of China’s international funding.

Indeed, any doubts about the Hong Kong dollar peg and an exodus of capital from the city have been largely erased by a flood of hot money pouring into Chinese initial public equity offerings this year.

A push in Washington to make Chinese companies listed on US exchanges open their accounting to scrutiny, in combination with proposed legislation that would force them to delist, has seen many firms look to list on the Hong Kong stock market to hedge their bets, buoying the value of the Hong Kong dollar, analysts said.

Between April and June, the Hong Kong Monetary Authority, the city’s de facto central bank, intervened in the market several times to curb the strength of the local currency. On Monday, the Hong Kong dollar was exchanging hands at 7.754 against the US dollar, moving slightly away from the strong end of its trading band of 7.75.

“The fact that tensions continue to brew between the US and China could still mean a big change down the road,” Chang said. “China could possibly retaliate with sanctions on US officials. All this points to a very tense environment in terms of the bilateral relationship between US and China.”

Franklin Chu, president of Sage Capital Group, a private equity and global investment management firm, said the Hong Kong currency peg is not likely to break until it becomes clear that the city will no longer serve as a clearing house for international finance in the Asia-Pacific region.

“The US wants to maintain Hong Kong as a semi-autonomous financial centre,” Chu said. “[However,] the Hong Kong Autonomy Act legislation serves to send a clear message to Beijing that there would be significant financial and political consequences if the mainland acts to undermine Hong Kong’s autonomy.”

Herrero, from Natixis, said Trump’s executive order did not directly undermine Hong Kong’s role as a separate jurisdiction from China in multilateral agreements, such as under rules established by the World Trade Organisation. But its new status with the US risked changing the way the city was viewed by some international organisations and Western countries in the long run.
“All in all, Pandora’s box is now open in Hong Kong due to geopolitics stemming from the US-China strategic competition and decoupling,” Herrero said.