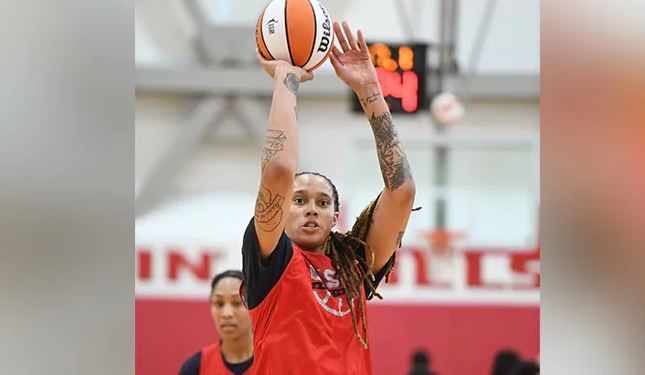 The US athlete Brittney Griner was handed nine years in prison in August for possessing vape cartridges with a small quantity of cannabis oil, after she was arrested at a Moscow airport in February.
Basketball star Brittney Griner has been sent to a remote Russian penal colony and has started serving her sentence, her lawyers said Thursday.

"Brittney began serving her sentence at IK-2 in Mordovia," lawyers Maria Blagovolina and Alexander Boykov said in a statement.

"We visited her early this week. Brittney is doing as well as could be expected and trying to stay strong as she adapts to a new environment."

The US athlete was handed nine years in prison in August for possessing vape cartridges with a small quantity of cannabis oil, after she was arrested at a Moscow airport in February.

The 32-year-old's case came amid fierce tensions between Moscow and Washington over Russia's military offensive in Ukraine.

The IK-2 penal colony is in the town of Yavas in the central region of Mordovia known for its harsh climate.

The IK stands for a "corrective colony", the most common type of prison in Russia.

According to Russia's Federal Penitentiary Service, the IK-2 houses more than 800 inmates who live in barracks.

Mordovia is also home to the IK-17 colony where Paul Whelan, a retired US Marine, is serving time after he was convicted of spying and sentenced to 16 years in 2020.

His family says he has been mistreated and undergone sleep deprivation there.

Russian penal colonies are known for their harsh treatment of inmates, unsanitary conditions and lack of access to proper healthcare.

Conditions in penal colonies are much harsher than in detention centres.

Activists say abuse and torture are frequent in Russia's vast network of prisons, a successor to the notorious Gulag system of the Stalin era.

When Griner was arrested, the two-time Olympic basketball gold medallist and Women's NBA champion had been in Russia to play for the professional Yekaterinburg team, during her off-season from the Phoenix Mercury.

She pleaded guilty to the charges, but said she did not intend to break the law or use the banned substance in Russia.

Griner had testified that she had permission from a US doctor to use medicinal cannabis to relieve pain from her many injuries, and had never failed a drug test.

The use of medical marijuana is not allowed in Russia.