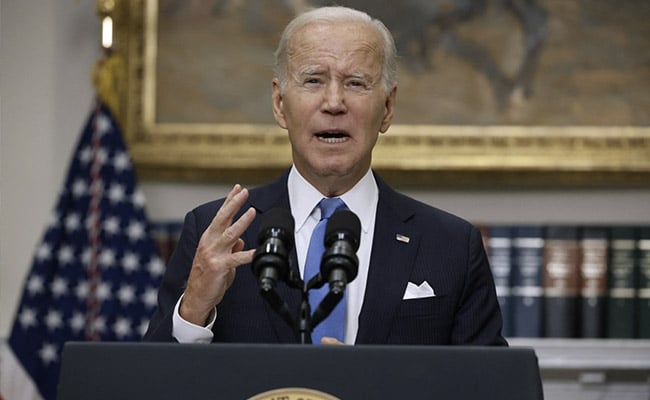 "US Will React To Saudi Arabia": Biden After OPEC+ Group Cuts Oil Output

Joe Biden last week said there will be "consequences" for Saudi Arabia as Riyadh other countries tied to OPEC have announced plans to cut oil production by 2 million barrels a day
US President Joe Biden on Wednesday said his administration will take action against Saudi Arabia after the Riyadh-led OPEC+ alliance announced plans to cut oil production, a move that America said would support oil exporters such as Russia.

"We're going to react to Saudi Arabia, and they're (Congress) doing consultation when they come back. And we will take action," Biden told reporters at the White House.

He was responding to a question from lawmakers, including Indian-American Congressman Ro Khanna, calling for a stopping of US arm sales to Saudi Arabia in the wake of the Kingdom's decision to reduce oil production.

Biden on Tuesday said there will be "consequences" for Saudi Arabia as Riyadh other countries tied to OPEC have announced plans to cut oil production by 2 million barrels a day in response to the slowing economy, a move that the Biden administration said would support Russia.

US National Security Advisor Jake Sullivan told reporters separately that the President was clear a day earlier that the US is re-evaluating the relationship with Saudi Arabia.

"This is a relationship that has existed over decades...And it's been built on a basis of bipartisan understanding. And the President wants to make sure that he is consulting closely with the Congress on a bipartisan basis as he re-evaluates," he said.

"And so, he looks forward to engaging the Congress when they return. He will make his decisions about how we proceed with respect to the relationship on his timetable, having had the level of consultation and reflection that he is keen to have, because these are, of course, consequential decisions," Sullivan said.

"He was clear yesterday that he has embarked on that process, and he's doing so with the purpose of looking out for US interests and values as we think about the future of the US-Saudi relationship," Sullivan said.

Sullivan said as the President has said from when he came into office, there is a range of interests and values that are implicated in the US-Saudi relationship and countries across that region and around the world.

"The step that OPEC+ took last week with respect to energy that helped Russia raises real questions. And you've heard not just from the President, but from members of Congress of both parties on this," he told reporters.

"So, I'm not going to get ahead of where he will end up on this because, as he said yesterday, he wants to be able to engage and consult with Congress when they return. He wants to be able to reevaluate in a methodical, strategic, effective way. And then he will, at a time and place of his choosing, lay out how he intends to proceed with respect to the relationship," Sullivan said.

"This is responsible, it's prudent, it's rooted in his fundamental interest in making sure that the relationship the United States has with Saudi Arabia serves the American people effectively. That's what he's intending to work through," said the National Security Advisor.