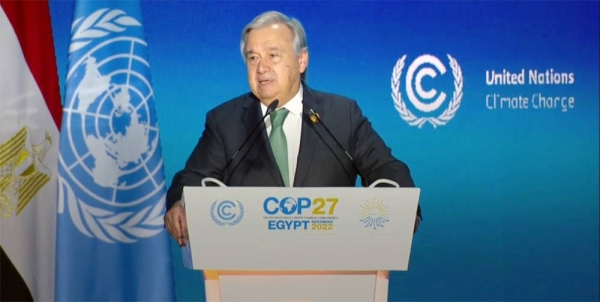 We are on highway to climate hell, UN chief warns summit

United Nations Secretary General António Guterres has warned: “We are on a highway to climate hell with our foot still on the accelerator.” But what does that mean? Here’s where things stand in terms of the numnbers.
Guterres has warned world leaders gathered at the COP27 climate summit in Egypt that humanity faces a stark choice between working together or “collective suicide” in the battle against global warming.

Nearly 100 heads of state and government are meeting in the Red Sea resort of Sharm el-Sheikh, facing calls to deepen emissions cuts and financially back developing countries already devastated by the effects of rising temperatures.

“Humanity has a choice: cooperate or perish,” Guterres told the summit on Monday.

“It is either a climate solidarity pact or a collective suicide pact,” Guterres said, urging richer polluting nations to come to the aid of poorer countries least responsible for the emission of heat-trapping gases.

Nations worldwide are coping with increasingly intense natural disasters that have taken thousands of lives this year alone and cost tens of billions of dollars — from devastating floods in Nigeria and Pakistan to droughts in Kenya, Somalia and the United States and unprecedented heatwaves across three continents.

“We have seen one catastrophe after another,” said Egyptian President Abdel Fattah El-Sisi, whose country is hosting the annual gathering running until Nov. 18. “As soon as we tackle one catastrophe another one arises — wave after wave of suffering and loss. “Is it not high time to put an end to all this suffering?”

Guterres, however, told leaders climate change could not be put on the “back burner”.

He called for a “historic” deal between rich emitters and emerging economies that would see countries double down on emissions, holding the rise in temperatures to the more ambitious Paris Agreement target of 1.5 degrees Celsius (2.7 degrees Fahrenheit) above the pre-industrial era.

Global temperatures have already increased by 1.1C since pre-industrial times, and scientists believe that going beyond 1.5C would see dangerous impacts for people all over the world.

Under the Paris Agreement in 2015, countries agreed to aim to limit the temperature rise to 1.5C. But there is “no credible pathway in place” to stay within that target, according to a recent UN assessment.

Meanwhile, former vice-president of the United States Al Gore said at COP27 that we are not doing enough.

“We have a credibility problem, all of us,” he said, referencing developed nations’ pursuit of gas resources in Africa. “We’re talking, and we’re starting to act, but we’re not doing enough.

“We have to see the dash for gas for what it really is, a dash down a bridge to nowhere, leaving the countries of the world facing climate chaos and billions in stranded assets, especially here in Africa.”

He saids: “It is a choice to continue this pattern of destructive behavior. But we have other choices.”

Barbados PM Mia Mottley began by saying that she doesn’t need to go over the “horror and the devastation wracked upon this Earth over the course of the last 12 months”.

She added: “Whether the apocalyptic floods in Pakistan, or the heatwaves from Europe to China, or indeed in the last few days in my own region, the devastation caused in Belize by tropical storm Lisa, or the torrential floods a few days ago in St Lucia. We don’t need to repeat it.”

Instead, she said: “What we do need to do, is to understand why we are not moving any further. 1.5 to stay alive cannot be that mantra and I take no pride in being associated with having to repeat it over and over and over. We have the collective capacity to transform.”
#ANT