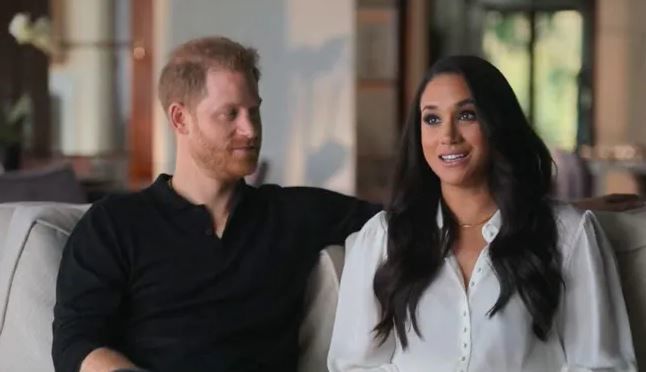 "We Know The Full Truth": Prince Harry Reveals In New Trailer Of Docuseries

The six-part docuseries shed light on the couple's love story and their lives in the royal family.
Netflix has dropped a brand new trailer for the forthcoming Prince Harry and Meghan Markle docuseries, 'Harry & Meghan'. In the new trailer, the Duke of Sussex revealed that he was worried for Meghan Markle and thought she would end up like his late mother, Princess Diana. He said that he feared that "history would repeat itself" when he married Meghan.

In the new trailer, Prince Harry talked about the history of bad treatment against women who enter the royal family. The teaser shows footage of Princess Diana and tabloid covers "The pain and suffering of women marrying into this institution, this feeding frenzy," Prince Harry said in the trailer. Meghan added, "I realized they're never going to protect you."

"I was terrified. I didn't want history to repeat itself," he said.

In the trailer, Prince Harry said that several stories about Meghan Markle were planted. "There's a hierarchy of the family. You know, there's leaking, but there's also planting of stories."

In the trailer, a journalist said, "There's a war against Meghan to suit other people's agendas."

The six-part docuseries shed light on the couple's love story and their lives in the royal family. The new trailer has accumulated more than 1 million views on Twitter.

Harry and Meghan, a mixed-race former television actress, cited racism in the royal household as one of the reasons for their acrimonious departure almost three years ago.

The family will be braced for more revelations from the docuseries and Harry's autobiography "Spare", which is due out in January.