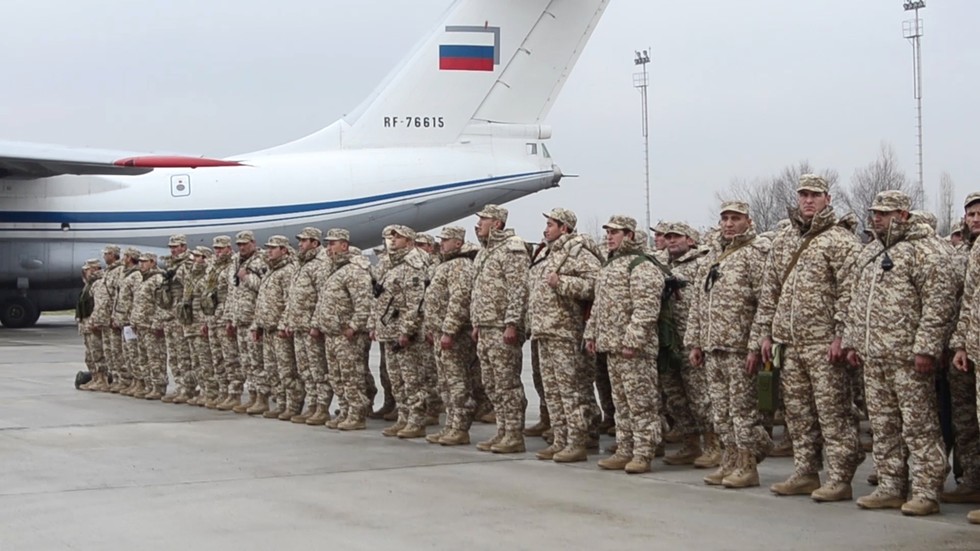 What are Russian peacekeepers doing in Kazakhstan?

A peacekeeping mission of the Collective Security Treaty Organization (CSTO) has been deployed to Kazakhstan as the nation struggles to control street violence. Here are the goals and the scope of the multinational mission.

The security bloc, which is made up of six former Soviet states – Armenia, Belarus, Kazakhstan, Kyrgyzstan, Russia, and Tajikistan – was formed in 1992, following the collapse of the Soviet Union. With the Soviet Armed Forces gone, the CSTO took on the role of providing collective security for the allied states.

The bloc is headquartered in Moscow, Russia, but is chaired in turns by the leader of each member country, in what is known as a rotating presidency. It makes decisions on a consensual basis. Member states hold joint military drills every year, and can’t be part of other military blocs, such as NATO.

The CSTO deployed a joint peacekeeping mission to Kazakhstan this week, with each country’s units arriving separately on Thursday and Friday.

2. Why did Kazakhstan’s government request peacekeepers?

Kazakhstan’s President Kassym-Jomart Tokayev requested the CSTO’s assistance on Wednesday, as violent unrest gripped the country. The president said the call for help was “appropriate and timely,” insisting that the country had faced not just protesters, but a highly organized “terrorist threat,” aimed at “undermining the territorial integrity” of Kazakhstan.

Mass protests based on economic grievances began in the country at the start of the new year, after a sharp hike in liquefied petroleum gas prices. However, despite the government’s concessions, they were soon seemingly hijacked by groups demanding regime change, as well as bands of violent rioters and looters. Kazakh law enforcement appeared to be unable to cope with the escalating violence.

The call for help was acknowledged by the CSTO within hours after Tokayev made his plea. Late on Wednesday, the incumbent chairman of the bloc, Armenian Prime Minister Nikol Pashinyan, confirmed that help would be sent.

3. Which countries sent their troops?

All of the CSTO members have sent forces for the peacekeeping mission. The force is made up of around 2,600 servicemen in total.

Russian military personnel and hardware were the first to arrive in Kazakhstan on Thursday. Belarus deployed a peacekeeping company task force on Friday, airlifting it into the country through Russia.

Armenia, Kyrgyzstan and Tajikistan have sent between 100 and 200 servicemen each, as well as deployed some military hardware.

4. Does it mean Russian soldiers will engage in street battles with rioters?

The main goal of the peacekeeping force is to protect “important government and strategic facilities,” the CSTO’s Secretary-General Stanislav Zas has said. The peacekeepers will also help local forces “maintain order” in the country.

The peacekeeping force will not be used to directly engage with protesters and rioters, and law enforcement tasks will continue to be carried out by the local police, the officials have noted.

“The military personnel of the CSTO collective peacekeeping forces are not involved in operative and combat activities of local law enforcement agencies and army units to establish law and order in the country,” the Russian Defense Ministry said on Friday.

5. Where will the peacekeepers be deployed?

While no precise list of the “strategic facilities” that are to be guarded by the peacekeepers has been provided, Russian military officials have revealed a handful of them. According to the Defense Ministry’s spokesman, Major General Igor Konashenkov, Russian peacekeepers have been deployed to protect the country’s consulates, as well as the international airport of Kazakhstan's largest city of Almaty.

Russia also has several sites of strategic importance that it leases from Kazakhstan, such as the famed Baikonur Cosmodrome. While it has not been confirmed whether any peacekeepers would be deployed to Baikonur, local authorities have ramped up the “terrorist threat” level and introduced certain restrictions, and self-defense patrols have been formed locally.

6. How long is the whole mission supposed to take?

The peacekeepers will stay in Kazakhstan as long as the country needs their assistance, according to Zas. No exact timeframe for the mission has been provided, but the peacekeepers are said to have been deployed for a “short period of time” into the Central Asian country.