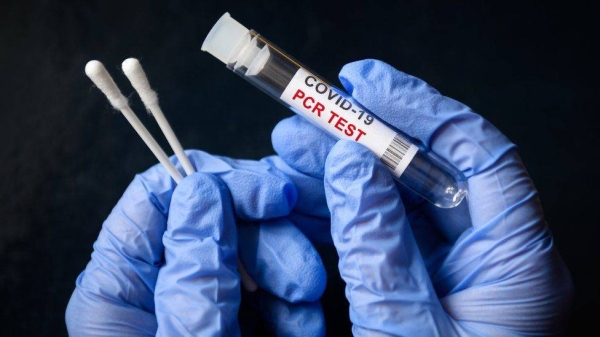 A 31-year-old healthcare worker caught Covid twice within 20 days — the shortest-known gap between infections, Spanish researchers have claimed.
Tests show the woman was infected with two different variants — Delta in late December and then Omicron in January.

This shows that even if you have had Covid before, you can still be infected again even if fully vaccinated, the researchers say.

Reinfections in the UK require 90 days between positive tests.

Based on that definition, health officials say nearly 900,000 people have potentially been infected twice with Covid up to the start of April.

It is difficult to pin down an exact number, because only whole genome sequencing can confirm the infections are caused by different strains, and very few positive tests go through this process.

The Spaniard did not develop any symptoms after her first positive PCR test, but less than three weeks later she developed a cough and fever which prompted her to take another test.

When the tests were analysed further, they showed the patient had been infected by two different strains of coronavirus.

In a presentation at the European Congress of Clinical Microbiology and Infectious Diseases, study author Dr. Gemma Recio said the case highlighted that Omicron can "evade the previous immunity acquired either from a natural infection with other variants or from vaccines".

She said: "In other words, people who have had Covid-19 cannot assume they are protected against reinfection, even if they have been fully vaccinated.

"Nevertheless, both previous infection with other variants and vaccination do seem to partially protect against severe disease and hospitalisation in those with Omicron," added Dr Recio, from the Institut Catala de Salut, Tarragona in Spain.

She said monitoring reinfections in people who were fully vaccinated was important, and would help the search for variants which evade vaccines.

Covid reinfections rose sharply in December 2021 after the much more infectious Omicron variant emerged, and there was another increase when a slightly different version of it, called BA.2, appeared in early March.

Before that, 1% of all cases recorded in the UK were labelled as second infection - but that has now gone up to 11%.

Most are likely to be people infected by the Alpha or Delta variants and then infected again by the more contagious Omicron.

Scientists predict that eventually everyone will catch Covid twice, and probably many more times over the course of their lifetime.
#Coronavirus  #Vaccines  #COVID-19  #Covid