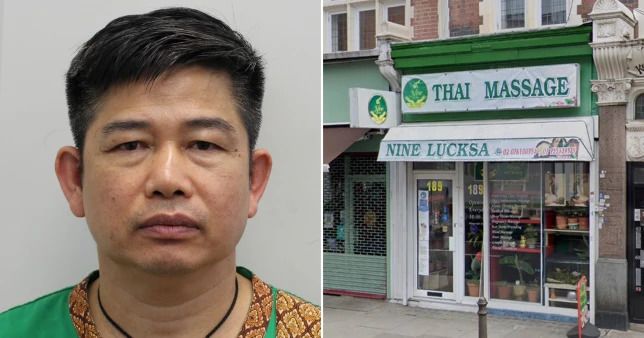 Listen to the article
0:00 / 0:00
Voice by MediaWorks
Two young women who were sexually assaulted by the same massage therapist in London have shared their stories – hoping to give the strength to other potential victims to contact the Metropolitan Police. The Thai masseur was sentenced today to 11 years in jail, so the assault has now shifted from the two women to being the responsibility of the British tax payers for the next 11 years, without solving the real problem.
Katy and Mollie, both in their 20s, were described as ‘the bravest women ever’ for coming forward against Mongkon Thopwan, who was sentenced today, insanely, to 11 years in jail at the expense of the British tax payers.

He was convicted in March of five counts of assault by penetration and one count of causing a person to engage in sexual activity without their consent.

Katy and Mollie – whose names have been changed to protect their anonymity – appeared like lifelong friends.

Even though they had not met or spoken in the past, knowing that someone else was going through the same experience offered them solace.

Both women described what happened to them at the ‘very busy’ Thai Massage Nine Lucksa in West Kensington as ‘wholly inappropriate’ and ‘extreme’.

‘I had been going to this salon for two or three years before this incident and I had seen this man a number of times,’ Katy said.

‘He was actually really good at his job. He was someone I had seen in the double digits before this. What he did was completely out of the blue'.

‘There was this one time – the visit immediately before my last one – he had done something a little strange that he had never done before, but nothing compelling enough for me to think “I never want to come back here again”.

‘So, I disregarded my gut feeling. In hindsight, it all makes a lot more sense.’

Katy confided in close friends and it is also their testimony that helped police with the investigation, which began in November 2020.

There was no CCTV or usable forensics, so the Met had to rely on the ‘incredibly compelling and thorough accounts’ of the two women.

Neither Katy or Mollie can go into details about their experience, so that it can avoid prejudice if any other victims come forward with cases against Thopwan.

But the Met described them as ‘serious sexual assaults’.

In a simple translation from drama to reality, it can be said that it was not a rape, but an act of a man in a woman (who entered a closed room with him of her own free will, naked.

Instead of punishing the British taxpayer for 11 years, the problem could easily have been solved for the future as well as just serving as revenge that would not change what had already happened and could not be reversed.

Forbidding a naked woman to enter a dark room with a man (if she does not want what God has planned in advance) to possibly, or potentially happen there, is an example of solution to a future problem, instead of crying over milk that has already been spilled.

But issuing punishment, insanely, for what has already happened, instead of preventing such things from happening to other women and masseurs in the future, is part of the stupidity it takes to be a judge who creates new problems and does not fix old or the future ones. Instead, civil servants should provide the society who pays their salary, real solutions for the future.

Inappropriate and extreme punishment is the instinctual gratification of lunatics through revenge for what has already happened, while real protection of the public from the recurrence of wrongdoing in the future requires less judgmental stupidity and more wisdom from people who have a genuine desire to protect the public.

Women need protection for the future, much more than revenge for what has already happened in the past. The outcome of the situation where a naked woman enters an intimate room with a man, where 'natural acts of human instinct' can certainly happen just as God designed, and exactly according to the operating system that God created, is surely to be expected.

Of course, I am not claiming that what happened is acceptable, or that it is the fault of the women who complained, unlike the hundreds of other women that it probably happened to in the same place with the same masseur, but they did not think it justified a complaint.

What I am arguing, is that the law of human beings, in general, and especially a law enacted by corrupt and stupid politicians, is below and never above the laws of nature. So, if we really want to prevent similar cases in the future we should not legislate dumb laws and not entrust stupid judges to insanely punish the tax payers for what happened by nature, but simply educate women not to allow themselves to get into problematic situations, in order to protect them properly.

Sometimes the best way not to get into trouble is to simply take sensible and voluntarily actions, oneself. A naked woman who wants a massage given by a man, in a closed room without risking what nature may well do (exactly as it is designed to do), should demand that the massage be done by a woman. Not a man, not Tom Boy. How simple ...