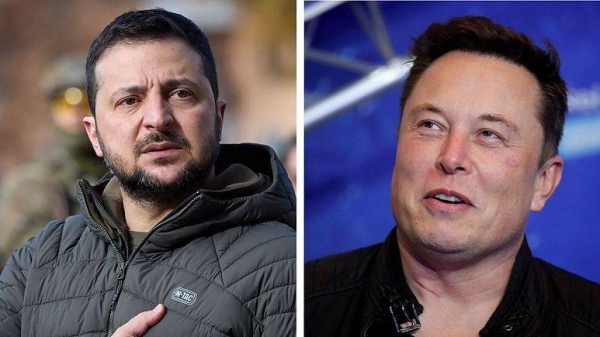 The US billionaire had proposed that Crimea should remain part of Russia and that UN-supervised referendums should be held in four regions of southern Ukraine.

Musk also said that Ukraine must "remain neutral," and in later tweets said, "victory for Ukraine is unlikely".

Kyiv and its western allies have slammed the "illegal" annexation referendums held by Russia in Donetsk, Kherson, Luhansk, and Zaporizhzhia. The Crimean peninsula was annexed in 2014.

Speaking via video conference at the New York Times DealBook, Zelenskyy repeated his criticism of Musk and encouraged the Tesla and SpaceX founder to visit his war-torn country.

"I think either someone has influence over him or he's drawing conclusions on his own," Zelenskyy said.

"If you want to understand what Russia has done here, come to Ukraine and you will see everything for yourself. And then you will tell me how to end this war, who started it and when it can be ended."

The Ukrainian president had initially responded to Musk in October with his own Twitter poll, asking if people preferred the Elon Musk who "supports Ukraine" or the one who "supports Russia".

Zelensky said he would never negotiate with Russia while Putin was in power.

Meanwhile, Russian Foreign Minister Sergei Lavrov said on Thursday that Moscow was ready to listen if anyone wanted to hold talks on Ukraine.

Lavrov also dismissed claims that Russia wants to hold peace talks to allow it to rebuild its armed forces.

Russia has denied targeting Ukrainian civilians in its latest missile strikes on Ukraine's energy infrastructure, which have left millions in the country without power ahead of the winter.

Moscow has instead blamed Ukraine's government, saying the attacks are down to Kyiv's refusal to negotiate.
#Elon Musk  #Tesla