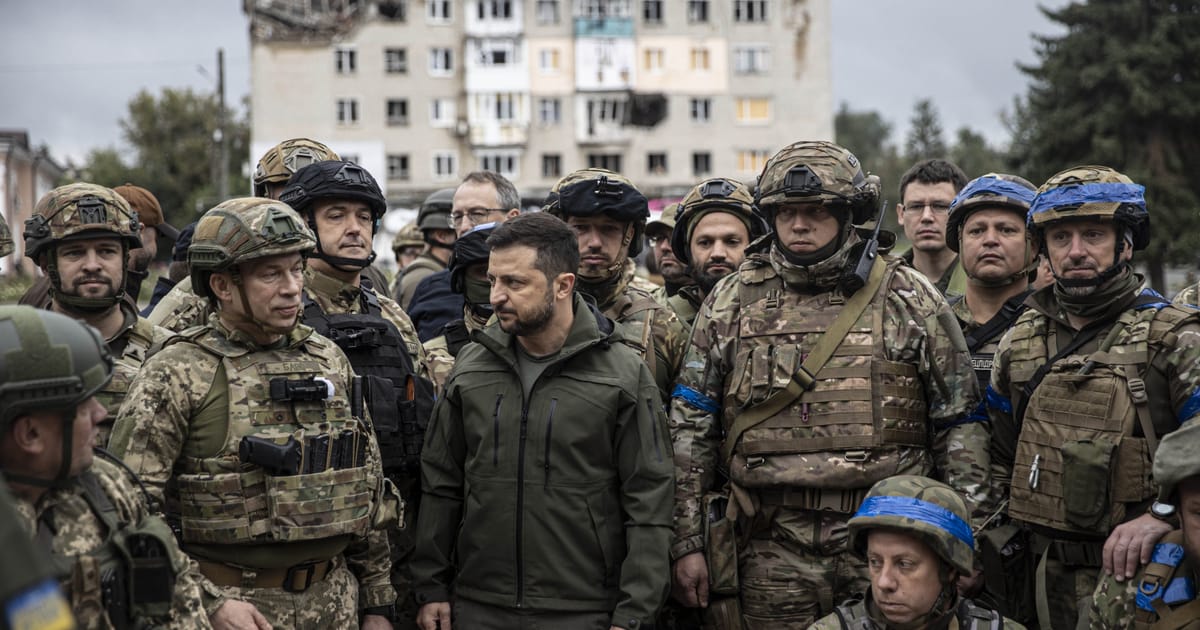 President describes shocking scenes on visit to liberated Izyum, and promises to drive Russian forces out of all Ukraine’s territory.

Ukraine’s President Volodymyr Zelenskyy visited the newly liberated city of Izyum on Wednesday, promising to push Russian troops out of all Ukrainian territories where they remain — including Crimea.

On a cloudy day in northeastern Ukraine, Zelenskyy raised the Ukrainian flag on Izyum’s main square, accompanied by military officers and senior officials.

Zelenskyy, dressed in the military-style uniform that has become his attire of choice since Russia’s full-scale invasion began in February, said that Ukrainian troops had witnessed “shocking” scenes in the newly recaptured territories.

“Destroyed buildings, murdered people … Unfortunately, this is part of our history today. And this is part of the modern Russian nation — this is what they did [in Ukraine],” Zelenskyy said.

Izyum, a city which had a pre-war population of around 46,000, was liberated last weekend during a surprise advance of Ukrainian troops in the Kharkiv region, after around six months of Russian occupation.

Photos published by the presidential media office showed a city scarred by burned and destroyed buildings around its main square, where the leaves on trees have started to take on a red-yellow tint as fall begins.

Zelenskyy also said that Kyiv plans to liberate all of the country’s occupied territories, including Crimea, which was annexed by Russia without any Ukrainian military resistance in 2014.

“My signal to the people in Crimea: We know that these are our people, and it is a terrible tragedy that they have been under occupation for more than eight years,” Zelenskyy said. “We will return there. I don’t know when exactly. But we have plans, and we will return there, because this is our land and our people.”

Zelenskyy’s ambitious war goals are a clear departure from the initial aims stated by Kyiv in the early weeks of war.

Back then, Zelenskyy and other senior Ukrainian officials said that Kyiv’s main target was to push the Russian troops back to where they were before the 2022 invasion — now in its 203rd day — began.

Mykhailo Podolyak, an adviser to Zelenskyy’s office, said in an interview with POLITICO that the war with Russia cannot be finalized at the pre-February borders.

“This will be completely unacceptable for Ukrainian society,” Podolyak said. “If this remains the case, Russia will look for an excuse for revanchism.”

He said that the current objective is to restore the territorial integrity of Ukraine as of 1991, when the nation’s declaration of independence was signed.

“Those boundaries must be restored. Russia will have to leave the territory of Ukraine,” Podolyak added.